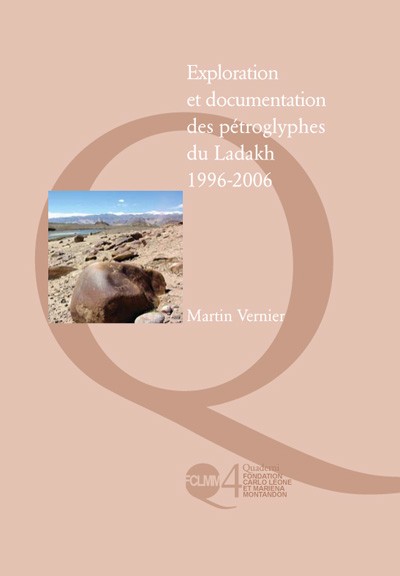 In the immense valleys of the Himalayas the sun is scorching hot, while the icy wind blows fiercely down from the peaks onto the spiky rocks and on the slender grass blades growing along the rivers. Over the centuries, in these severe and spectacular landscapes, befitting wandering meditations, men have carved and engraved images on the rocks. These rock representations, the hieroglyphs, are motionless witnesses of the passing of populations, of some of their activities and of their collective imagery.
Martin Vernier, with his “Exploration et documentation des pétroglyphes du Ladakh 1996-2006“, published with the support of the “Fondation Carlo Leone et Mariena Montandon”, offers an updated analysis of the research dealing with the rock art of this region. More than one hundred sites and a dozen thousand carvings result in a considerable collection of information, accessible through a digital database of images and maps.
In these gigantic open-air galleries, one may chance upon representations dating back to many different historical periods: masks, curiously armed and adorned warriors, hunting scenes and numerous animals, yaks, horses, deer. Distinctive features allow us to date the oldest images back to the bronze and iron ages. Intriguingly, the majority of these representations can be linked to the well-known world of the petroglyphs of Central Asia, of the steppes and mountains of Kazakhstan and Southern Siberia, showing historical connections with regions that are located much further north. All this in spite of the fact that between Ladakh and these steppes and these mountains lie the vast and inhospitable sands of the Taklamakan. The petroglyphs archived here complete the research efforts pursued for many years by the French Archaeological Mission in Central Asia on petroglyphs and on the nomadic tombs of the steppes, together with the discoveries made by the Franco-Chinese Archaeological Mission at Keriya (Xinjiang, PRC) in the Taklamakan Desert. This research proves not only that these high mountains are far from being “natural barriers”, but also that connections between Central Asia and Northern India were not limited solely to the two episodes reported in the texts regarding the Indo-Aryan migrations of the second millennium and those of the Saka tribes in the second century. These relations were ongoing and date a long way back in time: the petroglyphs of Ladakh contribute considerably in writing this historical account.
It is therefore my pleasure to write the foreword for this book, especially since it deals with a matter that is close to the heart of all researchers: the conservation of this world heritage, threatened above all by anthropic factors. It is important to raise awareness on the value of the rock art heritage at both local and international level and this book helps in bringing forward and supporting this cause.
This Book is available only in French language.