Ethiopian Crosses. The Sign of faith: evolution and form 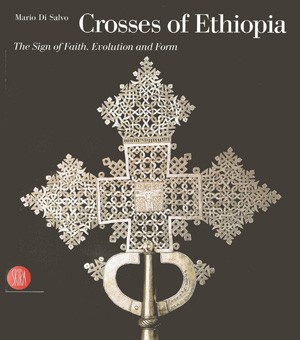 Shortly before her death, and after an attentive analysis of the work carried out until that date by the Architect Mario Di Salvo, Mariena Mondelli Montandon wrote the outline of a presentation of the study “Ethiopian Crosses. The Sign of faith: evolution and form”.
With great foresight, Mariena Mondelli Montandon grasped the full spirit of this study which had driven her passion and which she had supported while she still had the strength. It seems right, therefore, to include this rough introductory draft, one of the last things written by Mariena Mondelli Montandon before her death.
“The Carlo Leone Montandon Foundation concludes, with this book, a kind of Trilogy dedicated to classical Ethiopian art, which has presented to the public an immense fortune of beauty, still little known or studied.
"Ethiopian Churches. The Monastery of Narga Sellase ", by Mario Di Salvo (Skira 1999), examined the theme of the architecture of the Churches of the Lake Tana area and of the marvellous maqdas paintings contained within, while with "Etiopian Icons" by Stanislaw Chojnacki (Skira 2000) an enormous iconography was put at the disposal of scholars, supported by historical comparisons and exhaustive documentation, with this work Mario di Salvo has tackled a field all but unknown and unheard of.
The Crosses of orthodox Ethiopian worship constitute another disconcerting discovery for a western world convinced of its own geniality: for centuries in the primitive workshops throughout the Ethiopian high plain, unknown ironmongers and founders forged and cast crosses of unspeakable beauty and complexity.
It is possibly on the “complexity” of the creations presented in this book that we ought to focus our attention. In reality, if the Ethiopians wanted to glorify their creator, were the stupendous churches constructed within the rock at Lalibela not enough? Nor the wealth of shapes and colours in the marvellous maqdas? Nor the Sign of the Cross?
In the same way that in certain baroque churches fantasy exalts and swirls in infinite curls, coils, angels, putti, clouds and spirals which have no meaning, but are the manifestation of the love of God, of the generosity and the fantasy of the masters for whom one more curl is one more prayer, the Ethiopian Crosses, starting from the most simple of signs, evolve in an explosion of clones: the cross, plus the cross, plus the cross, almost without end. The cross-interpolated in signs of differing meaning which in the end tend always to exalt the primitive sign.
We feel that Mario Di Salvo’s work is absolutely unique in its genre and to take it on and conclude it required without a doubt a touch of folly! The result however is a work, which is in itself beautiful, which furthermore carries out a fundamental function as scientific reference for the possibility, now concrete, of recognising and dating creations for which the origin and date were unknown.
Leafing through this book gives the strong sensation that beauty has no master and can be offered to each and every one of us even by a humble devout artist from the middle of Africa, where, without compasses, rulers or computers, he has created endless great works of jewellery simply for the Glory of God.
The Carlo Leone Montandon Foundation, at the moment of conclusion of the “Ethiopian Trilogy”, hopes that its work can continue to propose a never before seen vision of the art of Christian Africa which not only must not be neglected, but which merits to be ever better known. The enjoyment of beauty leads always and only to happiness”.
Cernobbio, September 2003