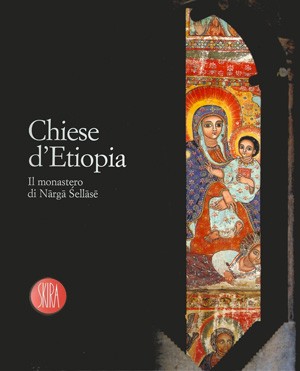 In 1997 the Carlo Leone Montandon Foundation organised and financed an expedition in Ethiopia to the Monastery of Narga Sellase on the island of Dek in the centre of lake Tana, not far from the imperial city of Gondar and in the centre of the vast, majestic Ethiopian high plain.
Founded in 1748, Narga Sellase is only one of the many monasteries, which dot the lake. The extraordinary beauty of the natural environment and the concentric spaces of the monastery complex surrounding the precious sacredness of the maqdas (Sancta Sanctorum), make Narga Sellase a deeply fascinating place. The church is without a doubt one of the masterpieces of the two-thousand year old Ethiopian civilisation, not only for the extraordinary quality of the paintings which cover the entire surface of the maqdas, but also because it bears important witness to the high level of religious and political evolution attained in that region of Africa. The Monastery of Narga Sellase demonstrates the extreme vitality, which invested the area in the 18th century, when European, Islamic and Indian influences united in an artistic expression, which fundamentally affected Ethiopia.
The project was supervised and carried out by architect Mario Di Salvo with the scientific collaboration of Ethiopian experts Stanislaw Chojnacki and Osvaldo Raineri. The project also boasted the technical assistance of a number of professors from Milan’s Politecnico University as well as of the Aleph photography studio located in Como.
The monograph “Churches of Ethiopia. The Monastery of Narga Sellase”. Was published in Italian and English at the end of 1999, following the expedition. The book consists of a unique and previously unpublished documentation regarding a monument hidden away in the heart of Africa which, for historical, religious and artistic reasons, deserves to be brought to the attention of scholars and enthusiasts, before neglect and deterioration due to environmental conditions and the passing of time damage it permanently.
Mario Di Salvo looks at the role of lake Tana in the historical evolution of Ethiopia, describing the architecture of the Ethiopian churches in their rich variety, to illustrate the monastic complex of Narga Sellase, its structure and its architectural, decorative and pictorial aspects.
Professor Stanislaw Chojnacki introduces the historical and environmental references, which characterise and style the Ethiopian Imperial court of Gondar in the 18th century, with their relative artistic repercussions.
Osvaldo Raineri systematically presents the origins of the pictorial representations, deriving both from canonical books and from the Ethiopian tradition, as well as from the new translation of a 18th century manuscript in ge‘êz(the classic Ethiopian language) on the History of Narga Sellase.