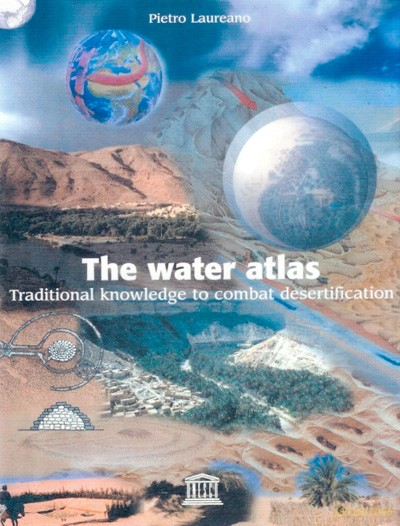 The desertification of large areas of the Planet is becoming one of the most important problems of the 21st century. Due to climatic changes and human activity, the phenomenon already affects circa 30 percent of the planet surface.
As part of a systematic examination, Laureano links the efficient safeguarding of ‘water resources’ to a series of organisational models of local development. The validity of traditional techniques thanks to which man has been able to adapt to hostile environments are analysed and advocated on the basis of a solid scientific approach.
With a view to facilitating the highest possible international distribution of a work of such potential importance for many areas of the planet, the “Fondation Carlo Leone et Mariena Montandon” financed the translation into English in 2003.

Extract from the presentation:
“This book ‘The Water Atlas’ reads like a novel, a novel of wisdom, of perseverance, of stubbornness, of man’s timeless work upon the earth in order to draw sustenance and life. A perfect example is the collection and conservation of water.
In every corner of the world, traditional systems, perfected by experience, much work, and the minimum environmental impact have assured the procurement of water for populations in hot, temperate and cold countries.
This book is a “Manual” destined to become a classic for those who are responsible for the maintenance and improvement of the quality of human life. These people should be moved to establish agreements, find compromises and put into action new/old strategies, starting with water. If it is true that water is, by nature, the ‘source of life’, it is also unfortunately true that the very same water is becoming one of the largest - if not the principal - problems that afflict our world.
Often farmers, the true “salt of the earth”, have simply forgotten the methods used by their predecessors, blinded by the ‘everything immediately’ philosophy with which Western man has unfortunately surrounded himself.
This book serves to remind us that maybe there is not so much new to learn: it is enough to look back, and retrace the paths followed a thousand times before.
The Carlo Leone Montandon Foundation is delighted to have had the opportunity to make their own contribution to the reissue of this work in order to further aid its distribution. Despite everything, we still have the highest faith in the latent resources of humanity. From a certain point of view it could seem to some that present times are the worst since the times of the Bible. However it is not the case. We have, for better or for worse, got this far. Before us the future unwinds and it is down to us to fill it. The experience of the past, the tenacity, the courage, the wilfulness, the imagination of our predecessors should lead us to come to new agreements with Nature.
If a thousand mini-projects were launched in the next three years all around the world for the ‘intercession’ of this book, the Carlo Leone Montandon Foundation would be satisfied in the knowledge that nothing is as precious as experience for the stimulation to react: a neighbour will see the fields of his friend in bloom and will want to know how it was done; a village will become interested in the new well, always full of clean water, in the village down the road; a farmer will want to know the “secret” which allows the grass of his neighbour to be cut three times, and so on and so forth.


"It could happen. It depends only on us”.