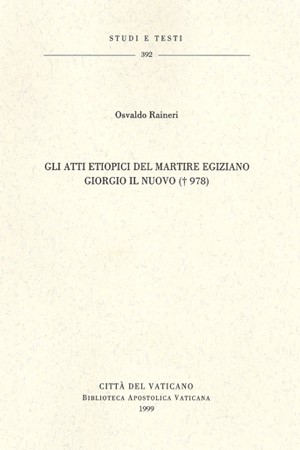 The research has unearthed numerous previously unpublished texts taken from Ethiopian manuscripts. Due to the variety of extant works, it is not always easy trying to decide which ones to study and publish: Ethiopian hagiography is one of the literary genres that has most fascinated and piqued the interest of Osvaldo Raineri.
The Ethiopian Acts of Saint George the New belong to the so-called “imported written texts”, and more precisely to the ‘Lives of the martyrs’, a collection which first appeared in Ethiopia in the 14th century. The book contains the translation from the ancient Ethiopian language ge‘êz of a text dating back to the first centuries of Christianity. It recounts the life of George the New, who lived in Egypt and was martyred there in 978 A.D. Born a Muslim, at the age of 12 he was seized by the desire to become a Christian and abandon pagan customs. He was baptized but subsequently denounced as a Muslim converted to Christianity. Despite being arrested, flogged, tortured, he always remained faithful to the name of Christ. The Virgin Mary appeared to him in prison in the form of a dove, while the Archangel Michael visited the Saint and comforted him. From that moment onwards, portents and healings took place among the visitors and prisoners. After he was killed, some of his remains were saved and his relics venerated by worshippers.