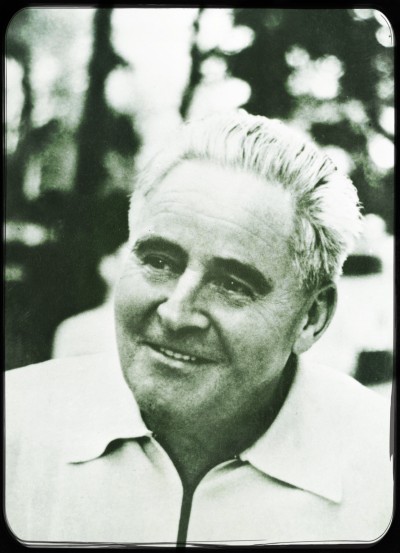 Born in Como in 1907, the youngest of the four children of Leone and Marie Dubied, both natives of the Neuchâtel Canton, Carlo Leone Montandon finished his studies in economics in Switzerland and worked his whole life in the cement industry, for many years as Managing Director of one of the largest and oldest cement manufacturers in Italy. In 1934 he married Greta Salis Samaden of Vienna, with who he had three children.
Carlo Leone Montandon’s personality was fundamentally positive: his faith in the ability of people was unshakable. None of the delusions or suffering that he faced was able to break this fundamental faith in others; not even the infinite pain for the premature death of his oldest daughter, Gabriella, removed him from his involvement - always very discreet - in the wellbeing of those who fate brought him close to. Even the serious, painful illness, which in 1977 cut short his active life was unable to embitter the sweetness of his character or sap his strength.
In the 1960s Carlo Leone Montandon was one of the first in Italy to establish large scale and efficient sporting facilities for the ‘free time’ (a term unknown at the time) of his factory workers and their families. He also requested that a low-cost grocery store be opened in the factory, and he supported the setting up and continuous improvement of the local nursery school which today bears his name.
With singular foresight, he constantly pushed so that every possible effort be made to repair the damage inflicted on the land by the unavoidable extraction of raw material for cement production. Nowadays similar behaviour seems commonplace, but this was certainly not the case in the years that Carlo Leone Montandon had to battle against the incredulity and even the irony of many. Even so, after many years, the works that he insisted on earned the prestigious recognition of the first award given by the European Community in this field.
Carlo Leone Montandon was a lover of the good and the beautiful, and he often helped young artists who in his opinion merited assistance.
He travelled a lot, both for work and pleasure, cultivating friendships throughout the world - every person was important for him and he himself was recognised by many, many people for the man that he was.
He would certainly not have wished for it to be known how many people - friends, acquaintances, people met by chance - he helped in silence, how many situations he rectified, simply because he felt it was his responsibility to do so, given that he was able.
For his whole life Carlo Leone Montandon stayed true to his belief in his own moral code, which above all demanded the most of himself, but at the same time granted the maximum faith to others.
It is for all of this, and for much more besides, that a cultural Foundation was established in his name. Twenty years on from his death, Carlo Leone Montandon is still within the hearts of those who knew him personally, and there are many who bear witness to this. But time passes fast: the Foundation will carry into the new century the memory of a Man who had faith in his peers, and will work in his name to help, within the limits of possibility, those who find within themselves the desire to be better.